The Photograph and the Painting

Immediately, the mirroring of the two images strikes home. I did not find this specific edition of Time Magazine in Constant’s archive but doubtless he must have seen it. And not just the cover but especially the full image, which would have most likely been printed in the cover article The Road to Hell by Joanna Mcgeary.

In the painting Constant mirrors the curve of the convoi and uses the white head scarf as an immediate eye catcher. With these two motives he creates a link with the photo and then flips the perspective. The convoi is now walking away from the audience to a place in the distance fading into his own signature. A safer place with a more hopefull future perhaps?

The woman with the white headscarf is now seen from behind as she joins the convoi. This is an interesting choice since in the photo she is the main protaganist and her determined resilience draws the spectator in. Her bare breast representing at the same time her vulnerability and her strength. The baby invisible in its white wrap fuels its mothers determination. By reversing the direction he shows the long road ahead of her. She is closely followed by a little girl in a pink jacket. It is the same colour pink as the faded print on the blanket the baby is wrapped in in the photo. As if Constant wants to make sure that the baby in the wrap will have the chance to grow into a little girl.

In the photo scattered through the line of people several red details stand out. Constant is a big fan of red and in most of his paintings you will find a detail of that colour, whether it is a collar, a flag, a seat, shoes, lips or, more gruesome, a puddle of blood. In the painting he gathers the scattered red details from the photo and merges them into one red jacket midway the convoi.

Smaller than the figures surrounding it, the jacket is obviously worn by a child. It evokes the  image of another red jacket. That of the small girl in the movie, Schindler’s List, which is entirely black and white. In the movie seeing the little girl in the red coat amidst the horror of the deportation of the Kraków Ghetto elicits a pivotal moment for Oskar Schindler, the movie’s protagonist. He brakes down emotionally when the scope of the Nazi scheme sinks in. This consequently propels him into his quest to use his factory to save as many Jews from extermination as he can.

It is unclear whether Constant has seen Schindler’s List. All the same, the one child in the red coat creates a sense of personification. By lifting out one child amongst the masses the painter and the cinematographer allow the spectator to connect to and emphathise with the suffering. It gives the victims a face.

The painting as well as the photograph remain a generous source of wonder and contemplation to me. Unfortunately, as the schoolgirls in the video of Stedelijk Museum Schiedam mention “it was more than twenty years ago but it could easily be today”.

If you want to see the painting, Les expulsés in real life, visit the exhibition The Future can be Humane at the Cobra Museum when the lockdown regulations are lifted.

Les expulsés is part of the video series “Constant in oorlog” by Gerrit Schreurs commissioned by Stedelijk Museum Schiedam, see links under related. 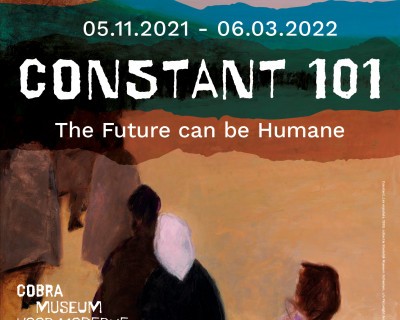